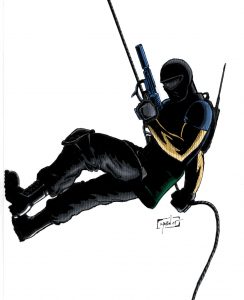 Below are my notes for OP GRANGE. They are pretty sparse because I like to leave a lot open. Players never do what you expect, so be ready to improvise.

For maps, I used Google maps to find areas, then Print Screen, and used GIMP to crop out the extraneous elements. Like with OP NOMOS, it provided a reasonable facsimile of a satellite photo, but that Google watermark remained. Good enough for gaming.

The OP GRANGE Notes:
Kidnapping: Canada’s Ambassador to Guinea, Matthew la Pointe was on his way to the airport when he got stuck in a traffic jam. His driver and fixer abandoned him and the ambassador attempted to return to the hotel on foot. He was caught up in a protest, and as a well-dressed Caucasion, faced angry accusations. A group of Islamic extremists who had been busy stirring up the crowd, took advantage of the situation and took the ambassador.

They moved him to a home in Hamdallaye, but weren’t sure what more to do with him. They have been trying to reach their contacts in Mali, but those guys have problems of their own. The UIAG has finally connected with a gun-runner in Guinea-Bissau who has connections with AQIM who figured he can facilitate a trade. The UIAG believe this is their chance to get in the big time.

Witnesses: A police officer, CAPTAIN Souhayr MAADJOU, was told by some locals about the grab. If the team questions the people at the Hotel de Niger, they will suggest the team speak to MAADJOU. They will call him if asked. Officer Thierno BELHASSAN will arrive instead, and he’s looking for a bribe. He doesn’t actually know anything, but says he can get them the information they need for $100 USD. He won’t take Canadian.

An hour after BELHASSAN arrives, MAADJOU will. He’s not looking for a bribe (which is why he got the information, he’s well-known as a straight-shooter) but he’s very concerned about a bunch of military guys running around in Conakry. He has three officers with him and he will help the team IF the police escort them.

Movement: The UIAG is planning to drive the ambassador out of Conakry. They are waiting for Abu Bakar, who is studying at a madrasa outside of the city, and who has a van they can use. He’s expected to arrive in the morning, but with the rebellion and protests all happening, the group doesn’t know when he will actually arrive.

Intercept: At 1005, the team gets a SATCOM transmission from ECHO CHARLIE, their CSEC liaison. A known AQIM affiliate in Guinea-Bissau was contacted by a Guinean cell phone within 500m of 9° 34′ 15.39″ N, 13° 39′ 33.95″ W (putting it in the Hamdallaye neighbourhood near the Rond Point Hamdallaye). The Guinean, called HAMBALI, mentioned he wanted to move a barrel of white sauce, which has been used before to refer to Western hostages. The gunrunner mentioned delivering the package to his cousins in the north, likely a reference to AQIM in Mali or Algeria. Traffic indicated movement would be today or tomorrow, meaning Sunday 12 Apr (today) or Monday 13 Apr. CHARLIE SIERRA will continue to monitor the number.

Target: One room basement apartment with a small kitchen and bathroom. HAMBALI, AL-SUDANI and AHMED AL-HESBAH will also be attending la Pointe, who is tied hand and foot, and whose mouth is bound with duct tape. He is generally on the ground, between the bed and the wall, under the window. Another member, OUSMANE DALEIN will deliver food at 1216 and again at 1641. He arrives on a moped and delivers the food through the window, which is easily removed.