Things have been quiet here as my effort is going into the Nefertiti Overdrive Kickstarter. If you haven’t yet, please do check it out and support it. If you have enjoyed any of my other games, it’s a good bet you’ll dig Nefertiti Overdrive. You can see the playtest rules by pledging $1, and if you don’t like what you see, you can cancel that pledge. It’s totally risk-free.

Over at Sword’s Edge, I dropped a post today about my writing playlist. If you were wondering what my favourite soundtrack is right now, that would have to be the Black Hole by John Barry. While my favourite modern composer is Hans Zimmer (based on the number of scores he’s penned that are part of my collection), I can – and have – spent all day with the Black Hole on repeat. It never gets old for me.

The print version of Centurion: Legionaries of Rome is now available from Drive Thru RPG and RPG Now.

I tried to provide a discount coupon for the print edition to everyone who already purchased the PDF, but many of those individuals do not allow emails. If you previously purchased the PDF of Centurion from Drive Thru RPG or RPG Now and did not receive your coupon, email me at fraser@swordsedge.ca along with your name and customer number, and I’ll send you the discount coupon.

And don’t forget, the Kickstarter for Nefertiti Overdrive is underway until 21 April. Don’t wait, support it today.

You can find Centurion: Legionaries of Rome for purchase here, here, and here. 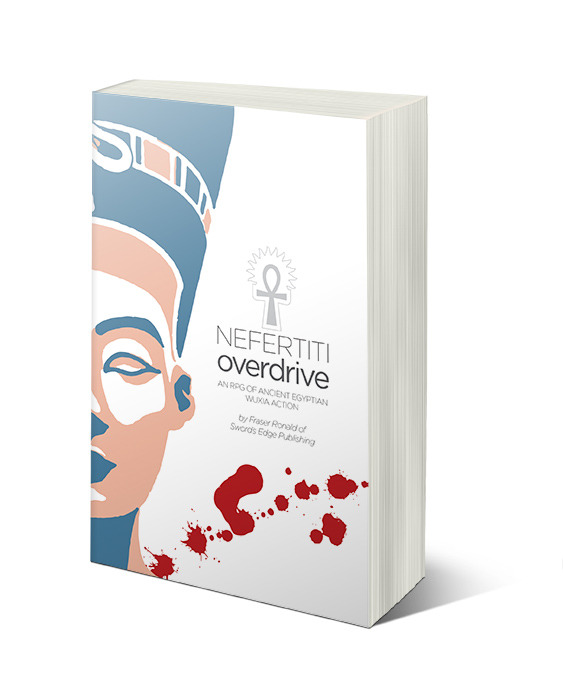 It’s happening. The time has come to punch an Assyrian in the face.

The Nefertiti Overdrive Kickstarter is live. You can get a PDF, a print copy, or even be the model for a character in the book. If kickin’ ass at Karnak sounds like fun to you, please give it your support.

It’s what King Tut would want you to do.

The Princess/Priest is also not the character that changes the most. Many other characters – the Amazon, for example – have different Concepts and Elements. This is because I designed the characters based on an imagined narrative rather than to work inside a game. Characters in RPGs need niches in order to shine. If everyone is a combat monster, everybody shines in combat. While all of the characters will be very capable in combat – this trying to represent the high adrenaline insane action of Hong Kong cinema – they each need a niche.

Since playtesting is ongoing, changes will be happening until Nefertiti Overdrive is out the door. That’s a feature, not a bug.

You can find the Princess/Priest here. The idea of Nefertiti Overdrive was a mash-up of legendary Ancient Egypt and the kind of crazy, cinematic action of the Wuxia genre. With rules, characters, adventures, and campaigns, the book has that pretty much covered, but it doesn’t end there. Also included are rules for gaming groups to create their own mash-ups, including character Attributes.

The system for this uses bidding for players to signal their level of interest in contributing to each category. The input for each category is limited, and once a die is spent, it is gone, so if a player really wants to include a specific concept, she must bid high and hopefully secure her input.

The categories – termed Features – move from the highest level, looking at the Inspiration and Setting, down through Plot and Character Goals, to Themes that can include specific scenes or NPCs the player wants to see in the game. These Features are all described in the book, and examples of different Features, as well as an example of creation from bidding to final product, are part of the text.

Once the players have an idea of the kind of campaign in which they’ll be playing, they then bid to decide on the four Attributes for the characters in the campaign. These Attributes serve the same function as the Attributes presented with the Nefertiti Overdrive pre-gen characters – they provide dice for task resolution. Just as with the pre-gens, each Attribute might be a single Quality or a collection of Qualities from which the player chooses one to contribute to the Test.

It is likely that the process and the following PC creation will take a game session. Instead of having a character generation session, the group will literally have a campaign generation session. This can lead to some very crazy mash-ups.

But those, honestly, can be the most fun. Although only two adventures are included in the book, this does not mean that Nefertiti Overdrive encompasses only those. The second adventure ends (hopefully) with the recovery of the Icon of Amun, but that Icon still needs to get back into the hands of the House of Kashta.

After the two introductory adventures, the book will have a discussion of where you might take a campaign. These are presented kind of as idea paths, what event could lead to what scenario, and how the NPCs might react to this. The campaign discussion will follow three broad paths: the retreat to Kush, underground opposition to the Assyrians, and taking Egypt back.

You can expect the Nefertiti Overdrive Kickstarter to begin on Monday, 17 March 2014. Get the word out!

You can learn more about Centurion: Legionaries of Rome here and can purchase it here and here.