The Sword at the Edge of Wuxia

A good friend of mine (hey JJ!) asked about creating characters from a genre like wuxia using Sword’s Edge. Would one do it mechanically or narratively? Would one use SFX? I didn’t really give an answer, but I’d like to now. 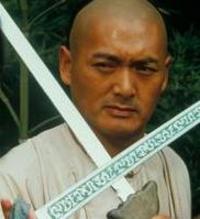 For this example, I’m going to use the character of Li Mu Bai from Crouching Tiger, Hidden Dragon. This should provide a kind of objective target from which to draw Qualities.

Okay, so we have our character, but before I can create Li Mu Bai mechanically, I need to know the setting in which he exists, and this is why I would say the kind of qi powers seen in wire-fu and wuxia stories can be replicated both narratively and mechanically.

If we are playing in a setting similar to Crouching Tiger, Hidden Dragon, there is no need to mechanically represent Li Mu Bai’s more fantastical abilities, like walking along the top of a bamboo forest, flying, or bouncing off of water. These are all accepted parts of the genre, and so I would expect that I could relate how Li Mu Bai acts using those factors narratively rather than mechanically. If Li Mu Bai were instead to be part of a story in which such powers are not common, then I would need to create a Quality that could explain them.

In creating Li My Bai in a fantastic, wire-fu setting, I’d be looking more to his character than to his powers. To me, the key part of the character is his fight against injustice. He arrives, seeks out the wrong, and attempts to right it. So I would make his Concept “Knight Errant.” That touches on both his martial skills but also his questing nature. I think his training would be his Background, and so I would make that “Warrior Monk.” I’m tempted to make his Faculty “Martial Arts,” but in this setting, most characters would be martial artists, so I’m going to call his Faculty “Sword Mastery” – this reflects the style that we see him use through the movie.

Here’s where I would deviate from the expected. To me, it is neither Li Mu Bai’s physical power nor his intelligence that drives his martial arts, but his force of will and sense of justice. I’m linking his “Sword Mastery” to Charisma. I’m also going to throw in an Element there, which is probably sub-optimal, but I think his “Arcane Medicine” is important, but that needs to be linked to his Cunning – I have a really hard time justifying it as a Charisma Quality, even though mechanically that would make sense.

As for Pivots, I believe his Goal would be “Justice for All,” his Quirk would be “Doomed Romantic,” and his Style would be “Contemplative Tornado of Violence.” 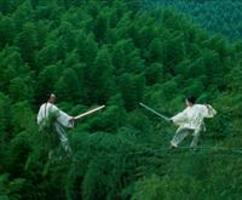 Were Li Mu Bai in a more common setting, like a straight-up fantasy, or semi-historical adventure, I might need to add more mechanics to justify his more “magical” abilities. I think in such a case, his Qualities would be about his abilities while his core character is expressed in his Pivots. I would change his Concept to “Mystical Sword Master,” and his Background to “Warrior Monk.” To really hit this on the nose, I might go with “Supernatural Sword Master” for Concept and “Mystical Martial Arts Monk” for Background. For Faculty, I think I would use “Perfect Balance,” but would still link it to his Charisma for the same reason. I could mark this as an SFX Quality, as something that allows him to do actions outside of the laws of physics. I would also have the Element “Leap of Faith,” as he doesn’t really fly, more jumps really well. This time, I can link it to his Charisma since it is powered by his qi energy.

I think his Pivots all still work really well, but I would replace “Doomed Romantic,” with “Knight Errant.” I think it’s important that the GM understand that this is important to the character – and that’s the role of the Pivot. I would love to work the doomed romance in there, but I think that could be done through the level of narrative control a player has. I could insert it into the story and link it back to his Knight Errant, many of whom – in European lore – were part of tragic love affairs.

So that’s how one could create a wire-fu, qi-powered warrior like Li Mu Bai both for a game that is specifically set in a wuxia environment or in a game that is in a Western-style fantasy. In the end, I prefer the former version, because it is much more about the character than his abilities. I think characters are more evocative when players can reveal their cores through their Qualities, but everyone enjoys something different. The beauty of light systems is they tend to be able to be flexible and hit a variety of targets.

At least, that was the plan with Sword’s Edge.

If this sounds cool, please check out my Patreon, for more adventures and games.