This month, the release through my Patreon is the Wall, a new role-playing game in which you play members of an occupying force in a foreign city. 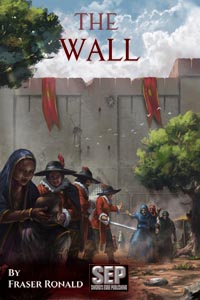 You are the occupying soldiers of a foreign power garrisoning a city far from home. You do not share a culture with the citizens, and your state has decided to use the existing political structure to maintain its rule. You stand as the voice of the occupying power, ensuring the elite protect that power’s interests while avoiding antagonizing the regular citizens. You do not want political opposition and you do not want riots.

And now you need to live with that.

This is not a game about playing inhuman monsters. It’s a game about playing humans in a monstrous situation. You are right in the middle of various factions, all seeking to better their lives or increase their power. You need to maintain order without alienating the foreign elite or making enemies out of allies. When you are ordered to do something wrong, how do you avoid it? How do you find a better outcome? And then what are the repercussions for you?

You can find the Wall at my Patreon.

Everthorn: The Centre of the World