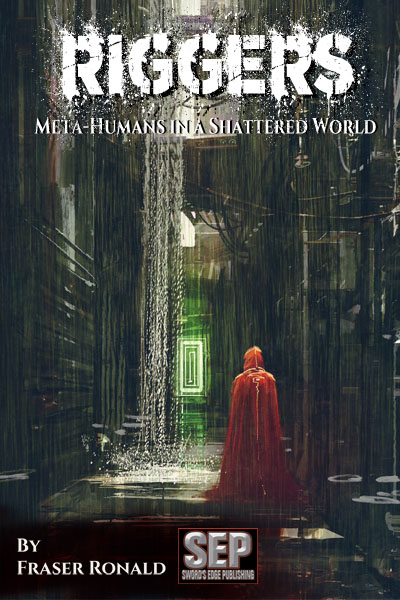 The results for my Patreon poll for July 2020’s release is complete. Riggers: Meta-Humans in a Shattered World will be added to the project queue. You can read more at my Patreon.

It’s 272 of the Common Era, and the Emperor Aurelian has defeated King Cannabas and his Goths, but has abandoned Dacia. Now he marches on Palmyra. As his force crosses Anatolia, Aurelian calls his trsuted retainers to him, and assigns to them a secret mission: contacting an imperial agent in Ankyra, an agent who may have access to Queen Zenobia herself.

Deep in enemy territory, the retainers learn that the agent has disappeared. Captured, killed, hiding—the retainers don’t know. All they know is that the clock is counting down, their emperor is relying on them, and the forces of the Palmyrene Empire may be hunting them.

Because facing down a Gothic Army wasn’t exciting enough.

Dark Roads: A Centurion Adventure is a possible project slated for a vote on my Patreon.

Undertaking the most difficult missions in the most dangerous locales, special operations forces are the tip of the spear. Secretive, highly-trained, and hauling the best kit, these shadow warriors represent a tactical response to strategic threats.

Direct Action is a game based on d20 and Fifth Edition, and draws on previous SEP products like Covert Forces: Redux, Blood and Guts 2: In Her Majesty’s Service, and Canada’s Combined Security Reconnaissance Section. Characters are special operators from national covert forces in adventures that can either jump from the headlines or explode out of fiction. Hunt down terrorists, shut down drug syndicates, protect diplomats in ungoverned spaces—the missions are as varied as the operators’ talents and training.

Kit up and head out for some high-speed, low-drag action.

Direct Action is will be the June 2020 release on my Patreon.

You were born into a world threatened by demons, protected by the benevolent Eternal. Now, the acolytes of the Eternal hunt you, ready to spill your blood, and you’ve found out the demons are real, and they are part of a war in the heavens. This world—your world—was built on lies, but its truths hold many more terrors.

Quantum and GOD: Gates of Hell is the sequel to Q&G: Rebirth (released through my Patreon but not generally available right now), and is an adventure for 3-6 player characters. It will be released with both mechanical information for Fifth Edition and for Sword’s Edge. Fifth Edition characters should be of levels 3-5. While the story provided does not require characters of good alignment, given that the goal is to save the world, good or at least non-evil characters are the most suitable for this adventure.

This adventure is intended mostly as a framework, but if played through with only the events and encounters related, will likely last two to four evenings, depending on the number of players and the speed with which they generally make decisions and move through mechanical encounters.

In this adventure, the PCs have been thrust into a world they don’t understand, and must come to terms with powers they’ve been raised to consider “demonic.” They’re chased by the followers of the Church of the Eternal, but have also found allies and enemies, and uncovered a threat to their world.

This provides a capstone to the adventure begun in Rebirth, but the world and the storyline begun there could wind through many other threads before arriving here.

Please note: a key component of this adventures is the questioning of a monotheistic religion followed by the populace of the setting, and revelations regarding it. While this is not intended to ridicule anyone’s beliefs, if you or someone in your group is sensitive to criticism of organized religion, you probably will want to give this adventure a pass.

Quantum and GOD: Gates of Hell is a possible project slated for a vote on my Patreon.

A once proud city, the centre of an empire, has fallen into disrepute. Its empire gone, its power diminished, it remains a vibrant commercial and cosmopolitan crossroads for trade from around the known world. Its gold still shines, but its streets are darker than ever.

Everthorn is the default setting for Sword Noir and was presented in the original core rules. With the completion of Sword Noir 2E, now would be an excellent time to reconsider Everthorn, re-work it, and present it anew. While the mechanics attached to the setting would be Sword Noir 2E, that system is abstract enough to allow easy adaptation of Everthorn to any setting seeking a major port city in which the PCs find themselves enmeshed in dark and gritty adventures for questionable patrons.

Everthorn: The Centre of the World is one possible project slated for a vote on my Patreon.