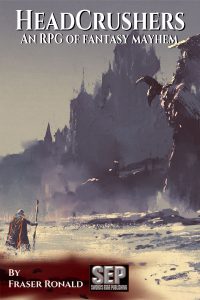 Sometimes you just need to crush a head to show you mean business. Kick down that door, kick butt, don’t bother taking names, that’s what I’m talking about. When you find out you are in over your head, distract, dodge, defend, and then get the hell out. Fast swords, fast brains, and fast mouths – that’s what you need.

Head Crushers a simple RPG about fantasy action-adventure, is now available through Drive Thru RPG. It’s a stripped down, easy to play game for straight-ahead fantasy adventures. The philosophy is customizable characters but minimal rules. There might be some ambiguity, but that’s a feature, not a bug – figure out how it works best for your group, then barrel on ahead.

Below is an example character sheet to give you some idea of what you are getting into, but if you’ve played any of my games in the past, you have a good idea, but to break it down, characters in HeadCrushers are based on Qualities and dice – the former provides the description and the latter are used for resolution, called a Test. Players roll dice against the GM, and no matter how many dice are rolled, each chooses only two – one for Success and one for Effect. Even if you roll six dice, only two of them are important, but rolling more dice increases the chance that one of them will be good.

The highest result wins at Success, which means that it’s better to have a bigger die than a smaller one because they generally get the bigger numbers. Die-type is used for Effect, so the result on the die is unimportant, only it’s number of sides. So for Success, a 7 rolled on a d8 beats a 5 rolled on a d10, but for Effect, you need to go big, so a d10 is better than a d8.

You can find HeadCrushers here.

Over at my Patreon, the vote is in and October’s release will be the newly christened “Cult of the Abyss,” which is the renamed “A Day’s Work,” an adventure for Fifth Edition – in following the OGL, one cannot indicate compatibility with a product covered by Product Identity, but I think you are all wise enough to grok the Fifth Edition of what. This is an adventure for 3-5 PCs of levels 5-7, though it best played with 4 PCs of level 6. This is designed for one or two sessions, depending on the number of players and speed of play.

It’s possible no one outside my Patreon will ever see this adventure (well, except for my daughters), so if you are interested, this might be the only way to check it out.

And I would greatly appreciate your support.