About a month ago, I wrote about sharing the spotlight among characters in RPGs, why it’s important players get a chance to have a character in the spotlight, and how you can make sure that happens. But since the spotlight is supposed to be about highlighting how special the characters are, how can you – as the DM/GM/whatever – create spotlight moments that fit the characters? 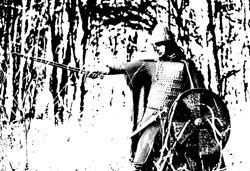 Of course, in order to fashion spotlights that sing, one needs to know and understand the characters. If one doesn’t know about the characters, one can design events that provide relatively generic spotlight moments – something to do with a good fight, something to do with a good sneak, something that needs magic, something that needs persuasion. These kinds of spotlights can be adapted on the fly to better suit the characters as the GM recognizes them or the players present them. This can be difficult to accomplish along with all the other tasks and responsibilities a GM has in many games, but doing so can really help to make the session memorable.

While how a player presents a character in play is perhaps the best guide to developing spotlights for that character, most systems will have hints for the GM. The games that I have designed all have a mechanic that can be used by players to signal the kind of scenes and spotlights they want for their characters. Pivots in Centurion, Nefertiti Overdrive, and Sword’s Edge all provides rewards in a slightly different manner, but the mechanic has another purpose which is the same across all three games – it signals to the GM the kind of spotlight the player wants. In general, this is by providing an indication of what is important to the character.

Most RPGs have mechanics in their character design that can indicate to the GM the kind of spotlight that would interest the player. Of course there are classes or careers, but these can be relatively generic and spotlights built on them tend not to feel personal to a character. However, if a player builds a fighter with a non-traditional skill – perhaps some kind of musical or artistic ability – that should tell the GM that the character needs to have a scene in which they use that skill. D&D 5E has personality information used both for gaining Inspiration but which also should inform the GM in building spotlight moments. Fate has Aspects and Stunts that can reveal much about the kind of cool scenes the player wants for their character. Look at what the player has built and be especially aware of the uncommon and non-traditional.

Spotlights are important for players, and the right spotlight, highlighting how unique the character might be, can really fuel the player’s enjoyment and immersion.

So I’m giving another listen to Dr. Kenneth Harl’s Barbarian Empire of the Steppes series from the Great Courses. This is maybe my fourth listen-through. Especially with Dr. Harl, I can listen to these series over and over again.

In episode three, Dr. Harl discusses early Chinese contact with the steppe nomads, and he talks about the Warring States period. He mentions how many of the northern states started building the kind of defensive structures that evolved into the Great Wall, and as is my wont, I started thinking about how cool that would be as a setting. 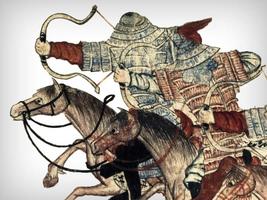 I can imagine a group of soldiers overseeing such a construction. The workers are peasants with whom the soldiers might have a lot in common, but the PCs saw that there was social mobility in the military. Some might be mercenaries, and some might be “auxiliary” troops, soldiers from neighbouring cultures hired into the military. The base of operations would be a fortified camp.

This could actually be something similar to the Hell on Wheels TV series which is a Western action-adventure retelling of the construction of the railroad. Like that, there would be characters conflict, cultural friction, and fights within the camp, with actual incursion by the steppe nomads a rare occurrence.

The easy over-arching plot is the rise of a leader that could unite the steppe nomads. The first hints would come from defectors, leaders from assimilated tribes unwilling to bend the knee to this new ruler. Attacks might become more coordinated and the PCs notice troops from different tribes/cultures raiding together. The PCs might be trying to get a warning up the chain of command but – as always seems to be the case – no one listens. And then the camp is overrun. The PCs are behind enemy lines, trying to link up with another military unit, possibly also trying to protect civilians.

A different narrative might see sickness spreading through the civilized lands and news keeps reaching the camp of this town or this village succumbing to the sickness. The reports are wildly exaggerated – as happens – but no one in the camp knows that. A local nomad leader comes with their shaman and warns the camp that unless they abandon the wall and come to join the nomads, the sickness will consume them to. The shaman has seen it in the oracle bones.

This could also be a framework for a more traditional adventure, with ancient sites near the camp disgorging supernatural threats that the PCs are then sent to investigate. There might be a big evil rising from its slumber, attempting to bring the steppe nomads under its control so it can re-conquer its ancient empire – basically the plot of the Sword’s Edge campaign I just wrapped up.

Education, great on its own but also awesome for inspiring RPGs!

You can find out more about Barbarian Empires of the Steppes here.